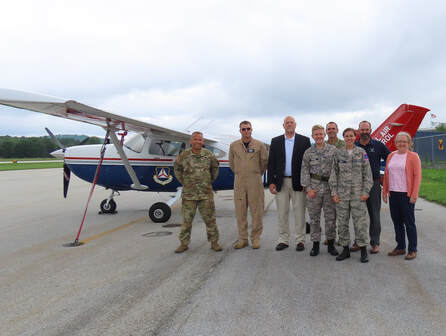 The encampment cadets started off their day with PT, performing exercises such as wall-sits, jumping-jacks, and much more. Morning Formation was completed and by 0715, the cadets were off to breakfast in the chow hall.

When chow ended, the cadets were marched to the classrooms where aerospace classes were presented to them by their staff. After showering and changing to ABUs, the cadets were taught a very informative class by Col. Kyle Fransdale, a CAP USAF Pilot, and Col. Matt Hunter, a former C-5 Pilot.

After our VIPs left, cadets came back to the barracks from various classes and activities to change into their PT gear and go to the field to play Capture the Flag. Once they were finished with their game, we had evening formation which was immediately followed by another amazing dinner.

After dinner, the cadets came back to the barracks to quickly organize their rooms for another dormitory inspection which was followed by a short talk about S.M.A.R.T. Goals and time management. Next up was personal time followed shortly by lights out.

Day 3 of NCOLS began at 0545 with the NCOs changing into their PT uniforms for their Initial PT Assessment Teaching. When that was finished, the NCOs headed back to Barracks to change in their ABUs for 0700 “Reveille - Morning Formation” where they witnessed the rising of the American flag before marching off to Breakfast.

After Breakfast things started to pick up for the NCOs as they made their way to Mt. Paine just down the street. From 0800 to 1100 they hiked up the mountain and got back just in time for lunch.

As lunch progressed the day only got more exciting as the NCOs got the chance to speak with the academy's VIP: USAF Assistant Secretary John A. Fedrigo. After lunch the NCOs marched to Mack Hall for their afternoon classes.
​
Their first class “Evaluating Cadets” further developed the NCOs’ abilities to give constructive feedback to cadets. Their second  class, Public Speaking, gave the NCOs an opportunity to sharpen their speaking skills in front of large crowds. Next they had their final class of the day “How to Teach a Class” from 1500-1600. To finish off their afternoon the NCOs practiced Drill and Ceremonies, followed by evening formation. After they marched down to dinner.
​
Once dinner ended the NCOs headed for the Wise Campus Center where they and the encampment cadets learned about CAP scholarships and Senior Military Colleges from 1800 - 1900. After some mentor and academic advising from 1915 - 2015 the cadets wound down and turned off the lights at 2045.