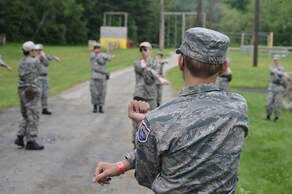 The 5th day started a little differently for the cadets. Instead of getting into their PT uniform, they woke up, changed into their ABUs, and went to practice Drill and Ceremonies where they were evaluated on their performance by their flight staff.

After drill the cadets lined up for morning Reveille to watch the flag being raised, then they headed over to Wise Campus Center for breakfast.

Once breakfast ended, Alpha and Bravo headed straight to Mack Hall where they had their first class of the day: Aerospace.

While Alpha and Bravo were in their aerospace class, Charlie and Delta flights were at the Obstacle Course. When Alpha and Bravo finished with their class, they headed over to the Obstacle Course while Charlie and Delta went to the forementioned class. Both flights then headed to Mack Hall's Auditorium for Col. Mark Ciero's presentation after which the cadets marched back to Wise Campus Center for lunch.

When lunch ends, the cadets get into blues for inspection and then march down to dinner.

Once dinner concluded, all the flights attended the classes' Aviation Panel and Enlisted careers discussion. To end off the day, the cadets had some drill time and personal time to prepare for bed. 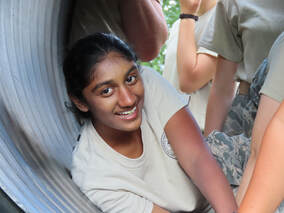 After breakfast, they marched to Mack Hall to work on their Hip-Pocket assignments. They were given time to make final preparations and then presented their speeches to their fellow students and NCOLS staff.

When all of the NCOs finished presenting their Hip-Pockets to the NCOLS staff they marched to Mack Auditorium for a guest speaker, Col. Ciero, and continued on to lunch at the Wise Campus Center.

After dinner the NCOs practiced Drill & Ceremonies and had a Self Discipline discussion at Mack Hall. Once they finished their last class, the NCOs marched back to the barracks where they had Mentor Time and Personal Time before lights out.