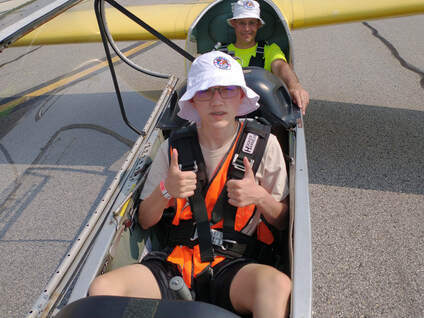 Encampment opened up day two with calisthenics, Cardio, and general PT. Following this, the cadets marched over to the drill field to participate in opening formation, signifying the beginning of the morning academic period.

After breakfast, several cadets had a fun time out on the airfield on glider flights.

An interactive class on military air power was taught by C/SMSgt Haddad which included models of various aircraft throughout history.

Later in the Morning, the Cadets got a chance to swim in the Pool where they were given a water safety class along with water PT.

After enjoying lunch and drill time, older cadets were taken on an exciting tour of the Engineering Lab at Norwich while the remaining cadets participated in an aerospace activity.

The cadets then had their first dorm inspection, where the encampment staff checked their bunks to ensure they are up to standards.

After retreat formation and dinner, the cadets engaged in a drug demand reduction course and learned about being a good “wingman” for their fellow cadets. After returning to the barracks for their evening routine, they went to bed to rest up for the days to come. 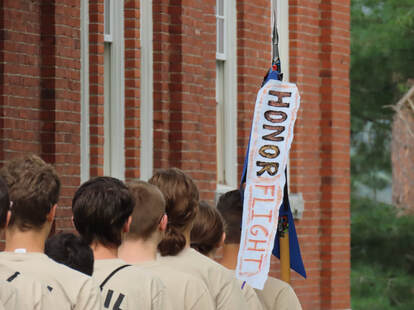 NCOLS started the day bright and early with their daily PT, including but not limited to push-ups, lunges, and running. They marched up to the parade field for reveille formation and continued on to a fulfilling breakfast at the Norwich dining hall.

After lunch they proceed to the pool, the highlight of the day. They had an hour of free swim time and enjoyed playing many rounds of sharks and minnows.
The NCOLS cadets then spent more time practicing their leadership skills discussing various hypothetical situations and working on increasing their command voice and presence.
​
Following another outstanding dinner from the dining staff and a presentation from Command Staff about a drug free lifestyle, the cadets enjoyed personal time before going to bed at 2045 for a well deserved night of rest.